Incidents in the Wicked Life of Moll Flanders

Moll Flanders is a bawdy story of a poor damsel who surrenders her virtue again and again (and again) to get to the top of society. If you’re rich, she’s available!

The script and production are a hit with audiences and reviewers alike – Barbara Rose Shuler writes for the Monterey Herald:

Penned by Bay Area actress and writer Jennifer Le Blanc and directed by PacRep’s gifted resident director Kenneth Kelleher, “Moll Flanders” earns thumbs up as an entertaining and well-crafted show. […]
Le Blanc has written a pure ensemble play, nimbly condensing DeFoe’s hectic plot into a couple of hours with engaging performances…
PacRep scores a hit with this original play — a lively period romp that makes a fine tonic for the November blues. 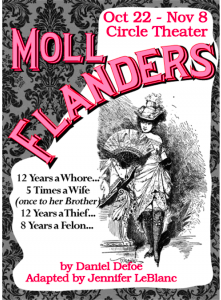 In 1722, Daniel Defoe presented the novel to a voracious readership and it was an instant sensation. This frolicsome adaptation by Jennifer Le Blanc brings to life this bawdy, daring, ribald – and true – morality tale, showing an independent woman of spirit making her way through a man’s world.

RIBALD AND RAMBUNCTIOUS, PacRep’s world-premiere production of Moll Flanders is two hours of glorious theatrical excitement. […] [the] script and production offer a vivid picture of a 17th century England obsessed with sex, thievery, romantic deceit and the continual threat of the gallows

This adaptation of Daniel Defoe’s Moll Flanders was first publicly read at Cerimon House in Portland, OR. After over 18 months of edits and adjustments for its first staging at Pacific Repertory Theatre in Carmel, CA, Incidents in the Wicked Life of Moll Flanders pleases audiences with its bawdy tale of vice and virtue!

Last night my wife and I saw PacRep’s play “Moll Flanders.” We found it to be a fun-filled show with a great cast. “Moll Flanders” was simply amazing.
We have been season ticket-holders to PacRep for about 20 years and we can’t recall a play we enjoyed as much as this one.
We absolutely enjoyed the show and had a great time.

You can get more information at Moll Flanders Stage Play on Facebook!

Goodbye to the Draper